How to Install and Use Brownie to Deploy A Smart Contract

In this article, we are going to install and use Brownie as a much simpler tool to deploy Solidity smart contracts using python scripts. Throughout this tutorial, we will install Brownie, create a Brownie project folder and deploy the simple storage smart contract. You will see that the whole process is done much easier and faster with Brownie rather than python web3.py scripts.

Install and Use Brownie to Deploy A Smart Contract

We have learned how to deploy our smart contracts using python web3 tools, but if you look at the scripts you will see that we have taken a very long way to get there. However, there is an easier and more efficient way to deploy our contracts in python and that is Brownie. Brownie is the most common smart contract development platform built based on python. It is used by DeFi giants like Curve DAO, Yearn Finance, and Badger DAO. Brownie relies on web3.py. That’s why we started our first python tutorials with web3.

And on Linux, you should also install the following:

And now, we can install Brownie:

If you want to make sure that Brownie has been successfully installed open another terminal and type: Coppied to clipboard. brownie –version

Now, that Brownie has been installed, let’s create our first project using it:

And then to create our files automatically:

And you will be able to see that a number of files have been created afterward.

Keeps track of low-level stuff like the .json file of the contract, deployments, and interfaces.

Where we write our contract.

Where we store our interface tools to make it easier to work with the blockchain And other folders which we talk about later. So, inside our contracts folder, we make a file called SimpleStorage.sol:

And copy and paste the recent SimpleStorage contract that we wrote on Solidity tutorials.

now if you go back to the main folder and type: Coppied to clipboard. brownie compile

You will see that the project has been easily compiled without the need of any scripts. And also if you go to build/contracts , you will be able to see the .json file with the name of the contract SimpleStorage.json. And if you can remember from the previous tutorials, the .json file of the contract contains data like ABI, bytecode, opcode, and so on.

Now, it is time to deploy this contract using Brownie. So to do that we go to the scripts folder and create a file called deploy.py. And before we start writing our scripts, let’s review our python code on web3. We needed ABI and bytecode which Brownie has automatically provided out of our smart contract, we also needed RPC URI that we copied from either Ganache or Infura. The Brownie here uses Ganache-cli and you need to make sure you have it installed if you want to deploy your contracts. The following code should be written in deploy.py.

And it is run by typing:

In the terminal, we will see that we are given an account address with its private key.
There is also another way to have an account on Brownie and that is to use our Metamask wallet.
To do that, in the terminal we write:

And you will see that the terminal asks you to enter your private key: 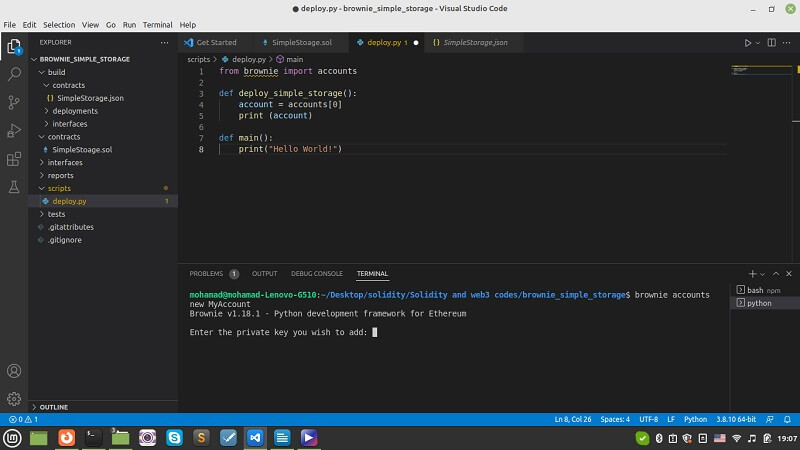 Now, you can copy and paste your account private key to introduce it to Brownie and be able to use it afterward. Then, you enter a password:

You will see the above result on the terminal. And it tells you that you can use the ‘MyAccount’ id instead of writing your private key.
You can write in console:

And, if you want to retrieve your private key in the future, we write in our deploy.py:

After running this code by writing:

We will see that the terminal asks us about our password So that we can finally access our private key. Notice that this a safer way than using a .env file, but still using environment variables is a safe way to protect your private key.
We can also delete our account using this command:

Coppied to clipboard. SUCCESS: Account 'MyAccount' has been deleted

So, up to now, we have learned about some of the good features and capabilities of Brownie and we have managed to deploy our smart contract much easier than with python web3 tools, this time using Brownie. However, managing the installed Brownie to deploy a Simple Storage contract is the least we can do. So, We’re going to cover the next stages in our next articles. 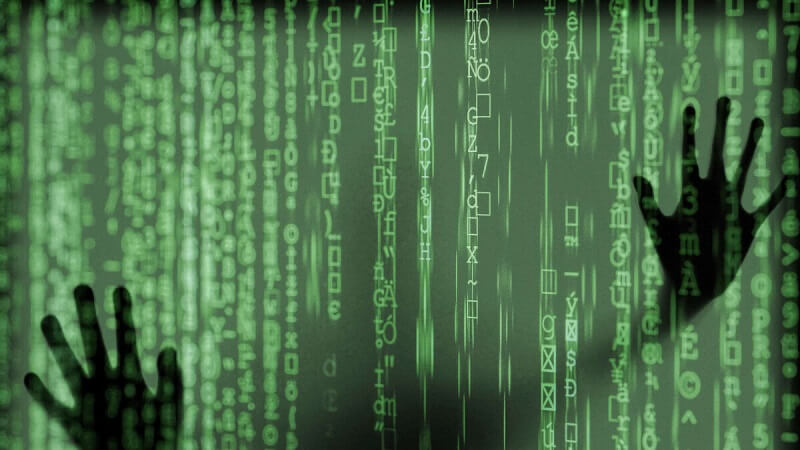 Check Out Our Services

In Arashtad, we’re working on 3D games, metaverses, and other types of WebGL and 3D applications with our 3D web development team. However, our services are not limited to these. Back-end developments, front-end developments, 3d modeling, and animations are in our arsenal too.

Arashtad Serivces
Drop us a message and tell us about your ideas.
Tell Us What You Need
Blockchain Development