How to Create and Use Custom Shaders in Three.js 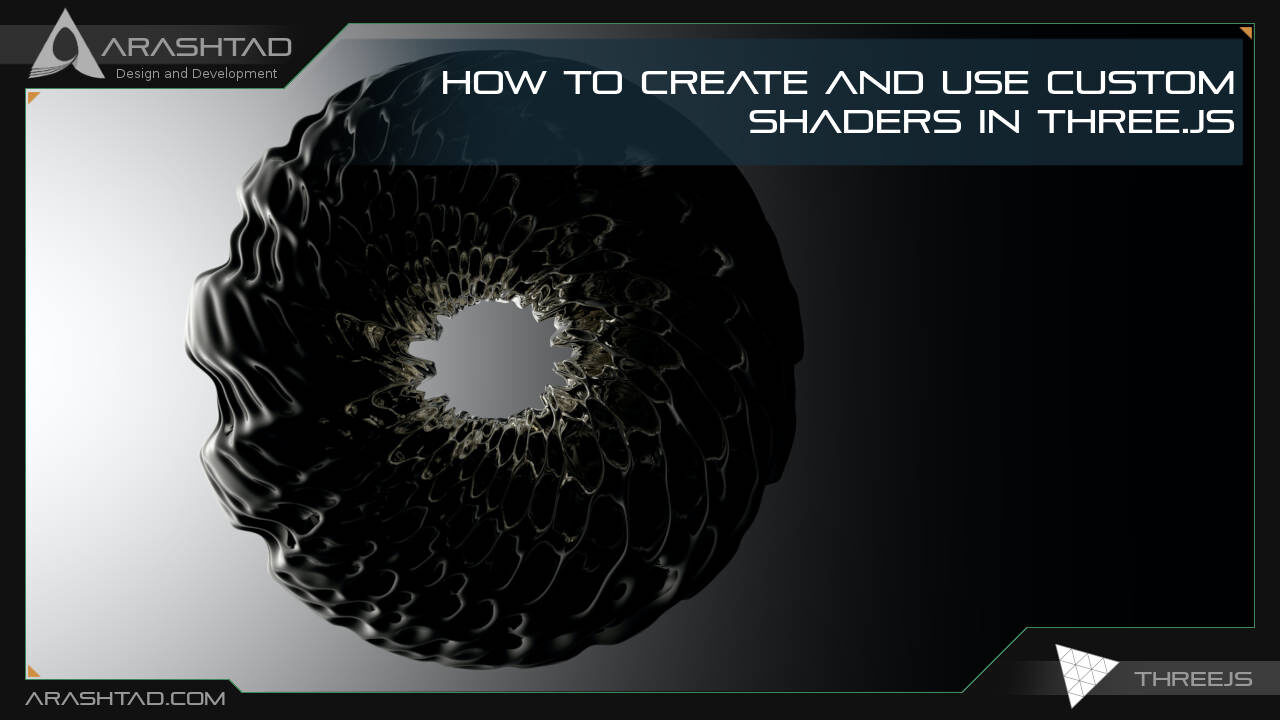 If you have read our previous articles on Three.js, you are familiar with the basic functions of this powerful tool. We have different ways to apply our desired textures on the surface of an object, One of which for instance is the MeshStandardMaterial() function we can apply any texture that we want on the object by using it. There is also another technique using which we can apply our desired texture to the object. Not only the texture but photo, logo, color, effects, and so on. This method is using shaders.

By using a shader, you can create the kinds of effects that you cannot normally do with the aid of built-in materials inside the Three.js. Consequently, using shaders which are written GLSL language, you have a wider variety of options to create a beautiful effect on the surface of an object.

Generally in computer graphics, a shader is a computer program that calculates the appropriate levels of light, darkness, and color during the rendering of a 3D scene. With this general definition, a shader will not boil down to the specific case of the program written in GLSL (OpenGL Shading Language). In other words, we can create shading using different methods and languages. For instance, in Three.js we can use the MeshStandardMaterial() function to cover many of the shading effects that we want including a custom texture or lighting, shadows, colors, and so on.

It is totally up to you to decide which way is easier to go to create the kind of shader that you like. But the easier way is to use MeshStandardMaterial() and it is recommended that you use this method as far as you can since it’s much simpler and faster than using the GLSL method. However, when your custom shader cannot be implemented using the Three.js functions, you will have no other option but to use the GLSL. In this tutorial, we cover both methods. The first one that we go after is using the MeshStandardMaterial() function.

A Simple Project to Use Shaders in Three.js

First off, make sure you have npm installed. You can start your first project by git cloning one of the simple Three.js projects to find a boilerplate for further development. Most of these projects can be found on Github, animate simple objects like a cube, sphere, torus, and so on. The animation is usually rotation. Running these projects and developing them step by step by changing some of the features about rendering, lighting, camera perspective, the color of the objects, textures, animations, and so on will help you find the necessary tools to design more complex objects. 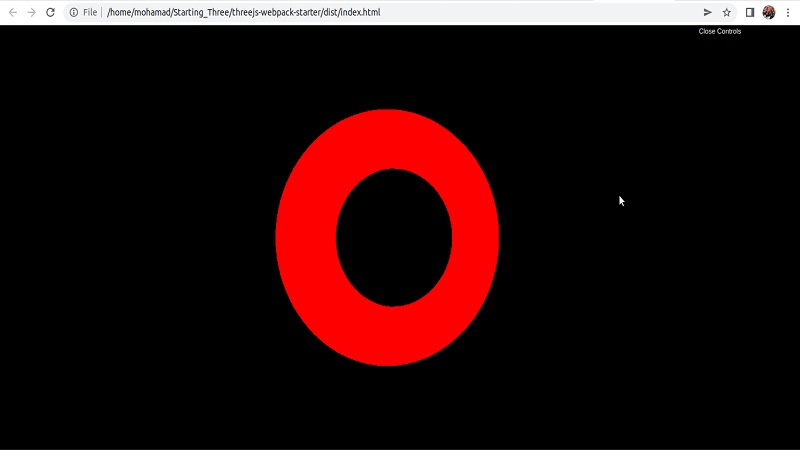 Coppied to clipboard. ***** Now, let’s head over to the JavaScript code behind the scenes and see the elements of this 3D design and rendering. In the src folder, script.js file, you will some scripts that we are going to modify later:

Although when we talk about shaders we most usually mean the one written in GLSL, here we want to show you simpler ways to create the effects that you want using the Three.js functions. The properties that you can apply to the object are color, lighting effects, metalness, roughness, textures, wireframes, and so on. However, if you work with the GLSL, you have a wider variety of options available. In this part, we are going to modify the code in the script.js file to create some effects on a torus object. To do so, we need to first define the geometry of the object, which here is a torus knot object.Second of all, we can change the material from basic to standard by writing:Instead of:And then, we can apply the metalness, roughness and color effects:The next thing that we should do is to modify the renderer a little bit from:To:The next thing that you should do is to modify the point lights like below (notice that we add another point light):Also in the style.css file, add a background color in the body section like below:Now, it is time to see the result by running the below command in the terminal: Coppied to clipboard. npm run dev The result: 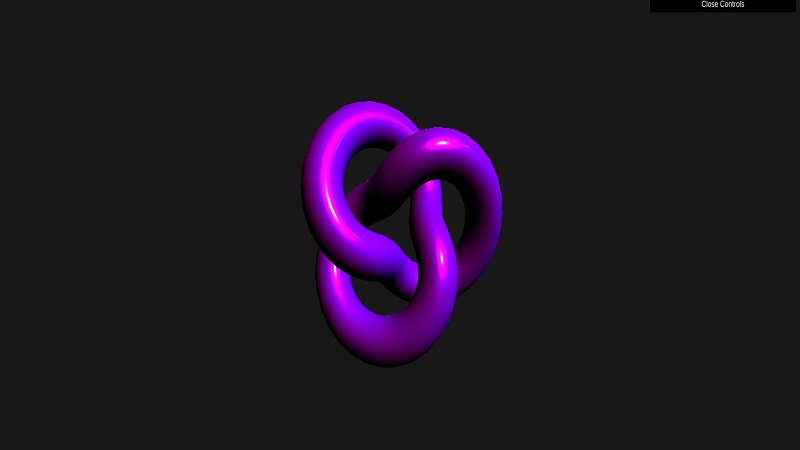 And if we add a wireframe to the material like below:And then save the script, the result will be: 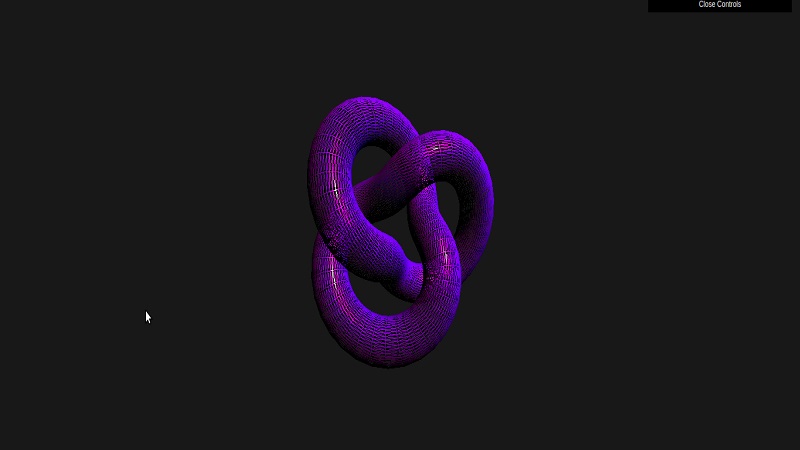 You can also make the meshes bigger by changing the geometry (4th attribute) from 64 to 16:The result will be: 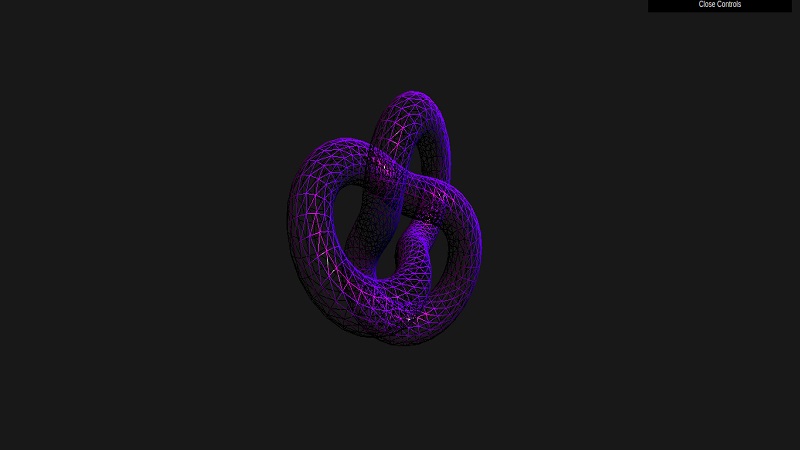 Using the GLSL language you can create a wide variety of shaders on the object. As there is a huge amount of shaders using this method, here we only introduce the template using which you can create your own custom shader in GLSL and consequently in Three.js. The scripts that we write here are just kind of a Hello World! of all shaders in GLSL. To get started, in the main directory, create a folder called shaders and inside it, create 2 files with the names: fragmentShader.glsl.js and vertexShader.glsl.js. Afterward, in the vertexShader.glsl.js file, paste in the following script:Then, you should enter another script in the fragmentShader.glsl.js file:After that, in the script.js import the 2 files:And instead of the:You can write:And in the end, you can define the mesh using the geometry and the material created by the .glsl scripts.After running the modified project using the npm run dev command, you will see: 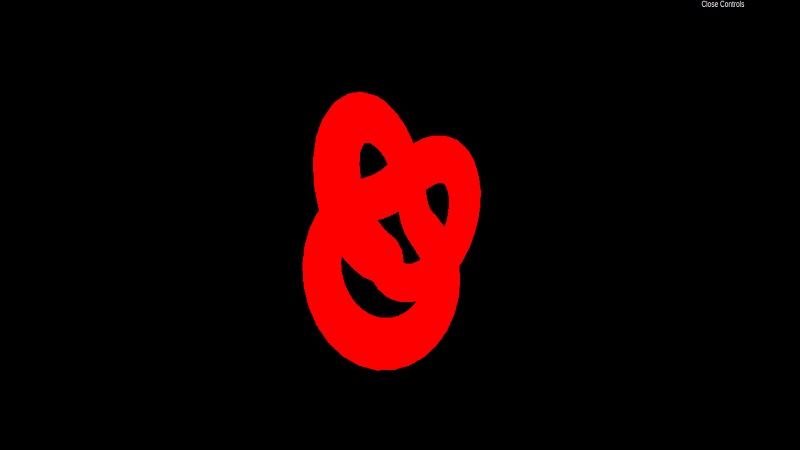 In this article, we have introduced different sorts of shaders including the ones created by the Three.js MeshStandard and MeshBasic function. Using these functions we managed to write different scripts to create shadings like metalness, roughness, color, wireframe, and so on. We also wrote a script to create and run the GLSL custom shader. With the GLSL language, we only wrote a code to create the red color for the surface of the object. However, there is a huge amount of other shaders that we can create with this language that help us create shadings beyond the imagination of others.

Some of the most famous shaders are creating textures, logos, backgrounds or even a combination of all of these shaders altogether applied on one object. Moreover, it is important to notice that GLSL is a more common way of creating shaders and most of the designers are familiar with this type of creating shaders.

Care to Know About Metaverse?

In Arashtad, we are providing custom services on 3d developments such as 3d websites, 3d models, metaverses and all 3d applications.