How to Become a Python Developer: Complete Python RoadMap 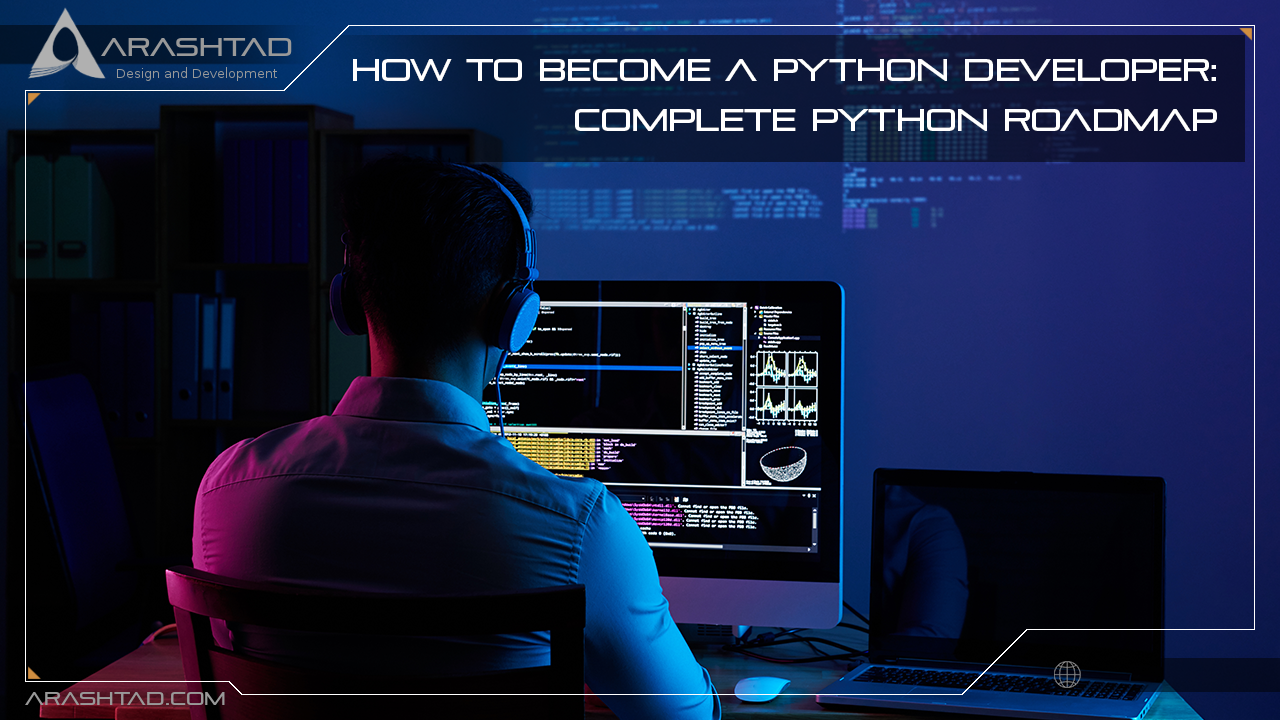 There are a lot of people who have benefited from Python in web development, data science, and web scraping. We have put together a clear python developer roadmap that serves as a complete guide to all the Python newbies to begin their careers with Python right from scratch. In this amazing guide, Python developers at the beginner and intermediate levels can find a well-structured roadmap. Arashtad is the best platform to begin if you wish to learn Python programming. Throughout this article, you will learn about becoming a reliable Python developer. So let’s get started.

Why Should You Learn Python?

In 2018, Python was the most popular programming language, and it appears to be continuing every year. The ease of access and growing demand make Python coding a lucrative career. Having in-demand skills will help you stand out from the crowd, and there are many job openings. Python offers several features that encourage programmers to use it rather than other languages. The syntax and readability of Python make it much easier to learn. Since it is so simple, developers won’t need to spend much time developing complex applications. Python excels at the implementation part, so they would only need to focus on that. Many programmers choose Python because it is a simple, versatile, integrated language in high demand. Companies like Google, NASA, Mozilla Firefox, Facebook, IBM, Dropbox, and Netflix rely on Python applications.

In Arashtad, we have gathered a professional team of developers working in fields such as 3D websites, 3D games, metaverses, and other types of WebGL and 3D applications, as well as blockchain development.

A Python developer has the following job roles:

The skills necessary to become a software developer include learning Python, web frameworks, and object-relational mappers. To integrate apps with other components, accessing RESTful APIs is essential. Having experience with front-end programming and databases is an important skill for a software developer. You will also need to be familiar with Python programming and system administration.

A Python web developer is needed to create server-side web functionality. They should be familiar with web frameworks, HTML, and CSS. To become a python web developer, you must have database expertise and Python programming skills. Tkinter is a must-have for GUI-based web applications.

The task of interpreting and analyzing data requires the expertise of a data analyst. They should be well-versed in mathematics and statistics. Several Python libraries are used for data visualization and manipulation, including Numpy, Pandas, Matplotlib, Seaborn, and others.

An influential data scientist must thoroughly understand data analysis, interpretation, manipulation, mathematics, and statistics to assist in decision-making. They should also understand machine learning and artificial intelligence, including regression analysis and naive Bayes.

An AI engineer must possess programming skills and a deep understanding of data science and data modeling. They must also be familiar with deep learning and neural networks. An AI engineer’s responsibility is to design computers that think and respond as people do in a given situation. These are achieved through cognitive simulations.

How to Become a Python developer?

When it comes to learning new technology, it can be challenging if you need to know what to learn and how to handle what aspects. This is why it is always best to follow a complete roadmap. Our Arashtad team has put together a complete Python developer roadmap so you can prepare for your interview and revise it. It is more than a way to build a schedule for learning new skills from basics to advanced levels and transforming into a reliable professional. Let’s start with a Python developer’s roadmap.

You might think of what turns a programmer. What all theories and topics should be covered to move forward if you’re new to coding?

1- You must learn text editors first if you are a programmer. They are a vital tool for anyone working with a computer. So, get started now.

2- The modern IDE is an essential tool for Python developers, and the Jupyter notebook is very popular now.

3- The database is the key to anything you do. Understanding what a database is and how it works, what syntax is associated with it, and how to connect it to the website and application you build before moving forward is essential.

4- Several extremely useful features and functions have been added to Excel over the years, making it one of those tools that you should know at least a little about. It is ideal for project managers, programmers, and developers.

5- To build and support your apps, you should have a basic understanding of networking because clients and users will access your website from anywhere.

To begin with, ensure that you are familiar with text editors, databases, integrated development environments (IDEs), excel sheets, and computer networks.

To learn all the basics of Python language, the following topics must be covered:

1-Data type: Python has various data types with multiple variables. Each type is assigned an amount of memory, allowing a particular set of operations for each data type.

3- Operators: These are the symbols that assist the compiler in performing logical or mathematical operations.

6- Loops: Loops are formed when the conditional statement comes back true. You will see three types of loops in Python programming: nested loops, loops, and for loops.

7- Functions: These functions can be described as a whole group of statements in a program that runs a particular task. They are the reusable code employed to run a solely related task. Employing functions reduces errors in code as a certain function can be tested at a time and also helps deduct the code size as it doesn’t have to be written again in a program. Additionally, you can create a function and use it to perform some action.

Some of the intermediate topics are listed below:

1- classes Object-Oriented Programming (OOP) uses classes to define objects in terms of their description and divide them into their parts.

2- Objects: Objects in OOP are data types created by the software developer. They can have properties, objects, and methods.

3- Lambda: Functions that are not well described using the basic format of function mentioning the def keyword are lambda functions.

4- Inheritance: This is the process of sharing functionality between classes. Moreover, it helps describe a class based entirely on another class.

5- Reflection: The ability for software to find out the attributes of various objects so that those attributes can be passed as basic measures to a program.

Also, you will learn all the above basics of Python, an open-source programming language, which will prepare you for building some great learning applications.

Now, when you are finished learning all the fundamentals of Python language as an open-source programming language. You must practice coding and reach the final stage of becoming a Python developer. Here are some tips you need to follow up on in the end stage:

2- Going Interactive: The best thing about Python is that it is efficient and attractive, so you can use it when learning the fundamentals of building an application.

3- Take Breaks: It is crucial to absorb and know what you have already learned while learning the language. Research suggests that taking breaks during study sessions is helpful because it allows you to work and learn more effectively. Otherwise, there would be cracks in programming burnout.

4- Solving Bugs: Making tough programs will definitely lead to several bugs. However, instead of getting irritated, you should take a moment to understand and solve them as part of the programming process rather than getting frustrated.

5- Contribute to open source: Open-source code is publicly available, and all can access it. Therefore, working with an open-source project and putting your best effort into it is recommended.

We have discussed the complete roadmap for the job of a Python developer. Further, we have listed significant topics to cover and helpful skills in Python to become a Python developer. In case of any doubts, our coding team of Arashtad will assist you. Multiple development teams are available in Arashtad that can help you see your ideas become a reality. Please don’t hesitate to contact us with any questions you may have about our team or your project. We will always be glad to help you with the best suggestions we can provide and the best work you can imagine.